ParaView was developed to analyze extremely large datasets using distributed memory computing resources. It can be run on supercomputers to analyze datasets of exascale size as well as on laptops for smaller data.

Currently, version 5.1.2 compiled with Intel/2017a against the Intel MPI library and OSMesa 12.0.2 is installed on the clusters.

On the clusters, ParaView is to be used in the client-server mode. A parallel ParaView server is launched on compute nodes by the user and the client is launched on your desktop PC to control and view the visualization. Download the ParaView client application for your OS here.

Your version must match the version number installed on the cluster.

To launch the server, you must first allocate compute nodes, for example:

to launch an interactive session on 2 nodes. For details, refer to Job Submission and Execution section.

After the interactive session is opened, load the ParaView module:

Note that in this case, the server is listening on the compute node r37u29n1006, we will use this information later.

Replace username with your login and r37u29n1006 with the name of the compute node on which your ParaView server is running (see the previous step).

If you use PuTTY on Windows, load Barbora connection configuration, then go to Connection -> SSH -> Tunnels to set up the port forwarding.

Fill the Source port and Destination fields. Do not forget to click the Add button. 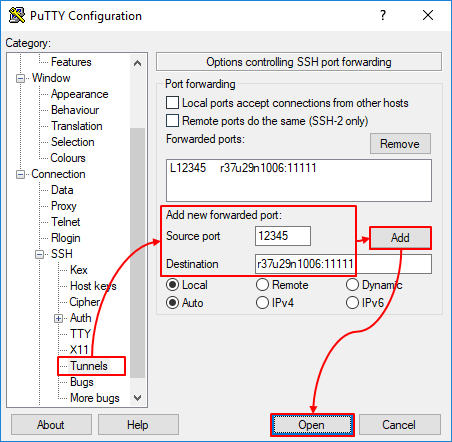 You can now use Parallel ParaView.

Remember to close the interactive session after you finish working with the ParaView server, as it will remain launched and continue consuming resources even after your client is disconnected.